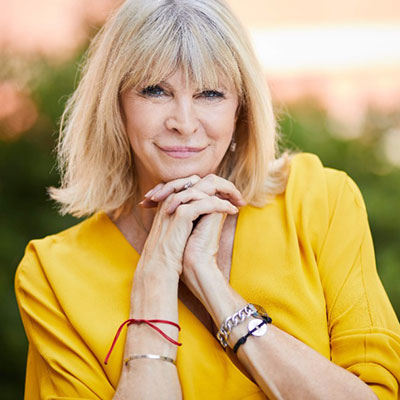 Join world-class therapist Marisa Peer to discover how to reprogram your immune system at a cellular level. Marisa will show you the powerful tools that demonstrate that it is possible to rewire your thoughts and beliefs to produce dramatic, life-changing results to your health.

There are few speakers today that have the wide experience and stellar reputation of Marisa Peer. Named ‘Britain’s Best Therapist’ by Men’s Health magazine, Marisa has spent over three decades treating a client list that includes international superstars, CEOs, Royalty, and Olympic athletes. Her engaging and amusing talks are peppered with anecdotes from an unparalleled career in which she has helped thousands of people to overcome profound personal issues.

Training early in her career as a child psychologist, Marisa later earned further qualifications from the Hypnosis Training Institute of Los Angeles and the Pritikin Longevity Centre. In addition to being a national magazine columnist, she has appeared on major media outlets and television shows including GMTV, Lorraine Kelly, This Morning, Sky News, ITV News, BBC News, Channel 4 News, BBC Radio, Supersize Versus Superskinny, Celebrity Fit Club, Celebrity Big Brother, Today Show and I’m a Celebrity Get Me Out of Here. She has appeared on countless television programs and news channels in America, Scandinavia, Japan, Africa, and throughout Europe.

A bestselling author of five books, Marisa’s USP is that she teaches “simple steps that produce dramatic and life-changing results.” She seamlessly brings her one-of-a-kind therapy room techniques to the podium, leaving her audiences both transfixed and transformed. When she reveals her fundamental rule – that all our emotional and personal problems come from us believing that we’re not ‘enough’ – and explains how to overcome it, the results are tremendous and dramatic.